The escape fraction of ionizing radiation is a measure of how many of a star’s ionizing photons make it to the edge of the galaxy. These photons are easily absorbed by cold gas so they are only visible to astronomers when galaxies are host to a lot of young, hot stars that overwhelm and heat the interstellar medium. We looked at the relationship between the escape fraction of ionizing radiation and another measure of the presence of young stars; the ratio between [OIII] and [OII] emission lines. Where previous studies showed a relationship between the two measures, we found that they actually act on different time scales and are not directly related at all. We show that observations might be explained by a combination of galaxy dynamics and orientation effects. Read more here. 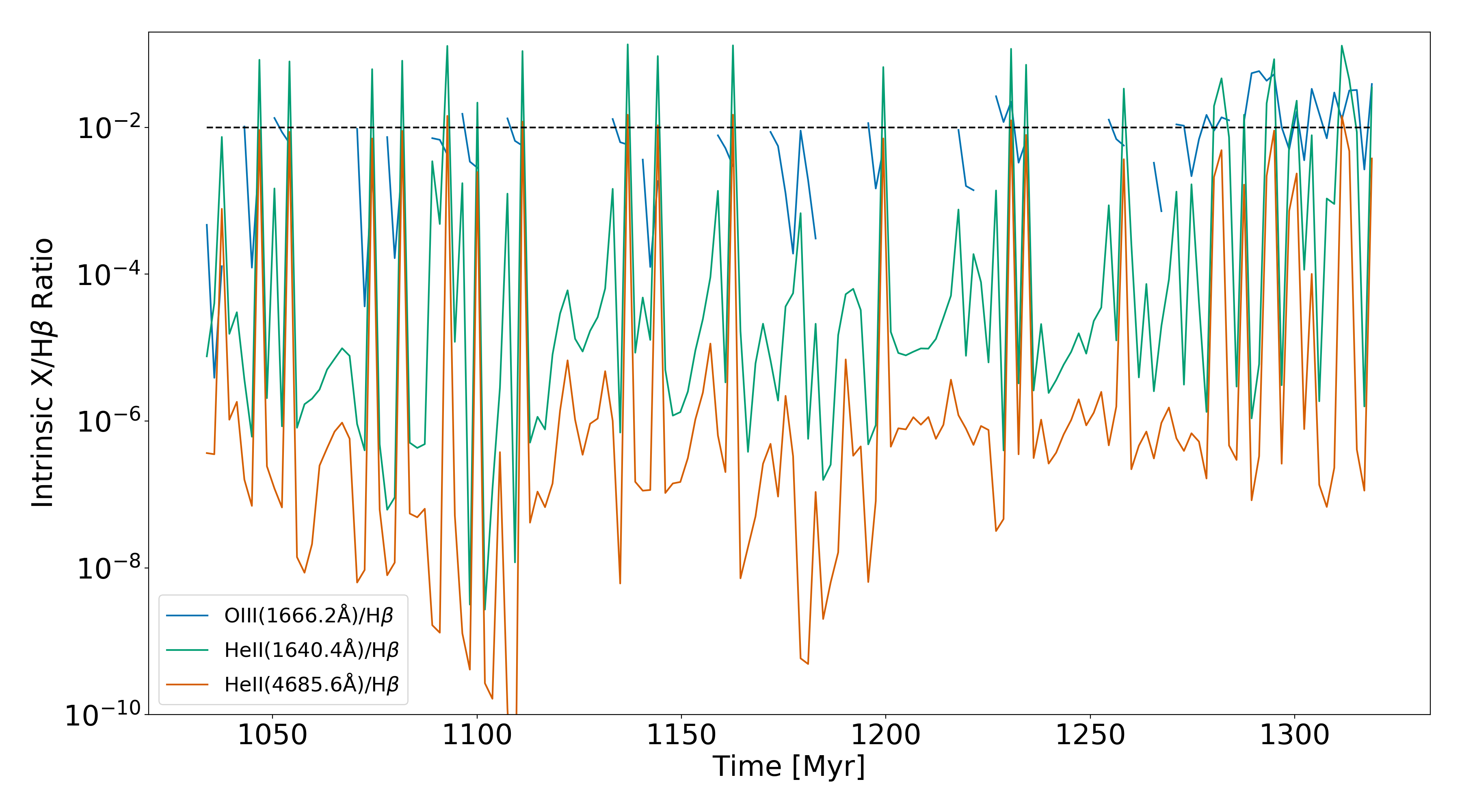 Stars generally form from giant, gravitationally collapsing clouds of dense interstellar gas. During their collapse, these clouds fragment to form stars with various masses within a single star cluster. The most massive stars of these stars (> 20 solar masses) burn the brightest and exhaust themselves much more quickly (< 20 Myr) than the less massive stars in the cluster, with luminosities up to millions of times as bright as our sun. Due to the super-luminous stars that shine during the tumultuous early life of a star cluster, the chemical constituents of the birth cloud and the surrounding interstellar medium are photo-ionized and excited.

Observationally, these young star cluster regions appear as hazy, colorful “nebulae” with tints of blue, green, or red. These colors are each associated with a specific ionization state of an atom and are extremely sensitive to both the geometry as well as the details of the radiation environment throughout the nebulae and any slight change can drastically affect their appearance. Thus, nebular emission is notoriously hard to reproduce in analytical models or simulations.

I worked on advancing numerical models and produce robust, time-dependent radiative transfer simulations of emission lines in high-redshift (4 < z < 6) galaxies. In my methodology paper, I explore the source of blue He II emission and explain why observed galaxies have much higher ratios of He II to H-beta emission than models predict. These ratios turned out to be very sensitive to the time intervals between episodes of star formation as well as the harness of the spectrum, but were mostly reproducible in cosmological simulations. Read more here.

In contrast to the formation of star clusters from collapsing gas clouds, simulations have shown that, under the right conditions, collapsing gas does not fragment and instead keeps collapsing until it forms a single, supermassive star. This star then quickly collapses under its gravity into massive black hole; a mechanism called the “direct-collapse black holes” scenario.

Astronomers have observed evidence of super massive black holes as early as a few hundred million years after the big bang (z =7.085), but it is not clear how black holes with billions of times the mass of our sun grew so quickly. We studied the observational signatures of the formation of a direct-collapse black hole scenario and found that it might looks differently through a telescope than anyone expected before. Read more from a paper I led here as well as a followup led by Aycin Aycutalp here. You can also read more about it in Newsweek. 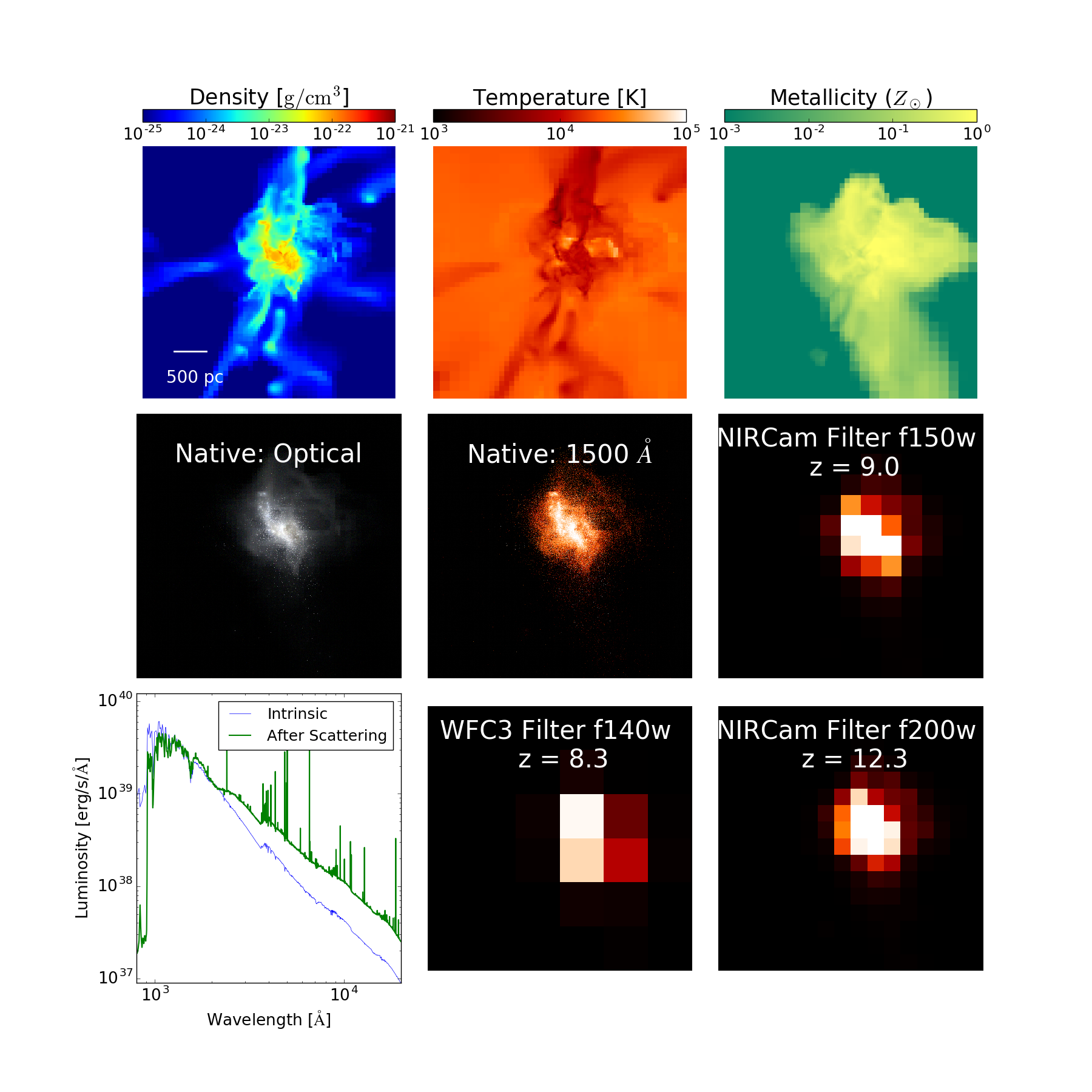 The first galaxies in the universe are fast-merging and irregularly shaped, leading to interesting dynamics and characteristics unlike what we see in the local Universe. Using a state-of-the art hydrodynamic simulations and a new Monte Carlo radiative transfer pipeline, we studied the observational signatures of early galaxies and the first stars and found several statistical trends for the first time. Read more in our papers here and here.

Spacecraft orbital energies can be boosted or dispersed by three body interactions with massive bodies like planets and moons. However, in many body systems, like within the Saturn system or amongst the inner planets, optimizing a spacecraft trajectory to minimize the need for fuel is an open-ended and highly non-linear problem. With Marcus Holzinger, I developed an optimization scheme for Mars-Earth cycler trajectories that take advantage of Venus transits to make quicker transits to and from Mars. You can see more in our conference paper here.

With Nathan Strange and NASA Jet Propulsion Laboratory, I worked on low-thrust trajectories that leveraged Titan, Rhea, Dione, Tethys, and Enceladus to seek a path deep into Saturn’s gravity well for a future Enceladus lander concept.